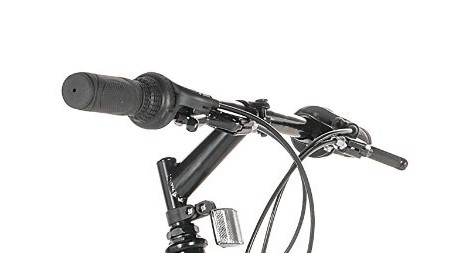 What is a Flat Bar Road Bike?

A flat-bar road bike resembles just about any other bicycle that you’ve seen except for a few core differences.

The bars, typically higher up, are dropped down low. This lowered, flat bar style requires the rider to bend more with the top half of their waist to engineer the maximum leverage amount. If you had seen one of these on the street, you would think that they are for cycling ‘pros.’ This is far from the truth.

When flat bar road bikes were first hitting the market in mass numbers, they were pretty much disregarded out of hand by the two core demographics of shoppers: casual cyclists and pro riders.

Casual cyclists didn’t like that the flat bar bike wasn’t comfortable enough to ride as the more conventional styles. What you had was a bike that could do a little bit of everything without actually specializing in anything.

Over time flat bar bikes have gotten more and more advanced, and now we look at them as the “jack of all trades” that they are.

Schwinn Vantage Mens/Womens Hybrid What we have here is a lightweight flat bar road bike that offers a multitude of different functionalities and conveniences for male and female riders that needs a bit of everything.

Schwinn is a brand name that needs no introduction in the world of cycling, so we’ll dive straight into their flat-bar bike. This model has a lightweight aluminum road frame to go along with alloy wheels. The 18 speed Shimano rear derailleurs work smoothly with the easy to use EF60 shifters. You have pull brakes on both the front and back and size 27″ wheels. The entire bike, assembled, only weighs less than 24 lbs. After testing the bicycle, don’t be afraid to try out a new road seat and then settle in for the long haul.

The Schwinn Vantage can be a fitness bike or a commuting bike, but it has the sturdiness of those rugged trail riding machines you see on commercials. There is a Shimano 18 speed drivetrain that helps you climb the hills and coast the flatlands and the 700c Continental sport contact II 35C tires mean you’ll be able to whether both in fair measure. We liked most about this cycle because it has the sturdier parts to be capable of handling some dirt trail riding.

Vilano Performance 700c Hybrid Flat Bar Commuter Road Bike Vilano is another steady name in the world of bicycle manufacturers. Vilano has been well-known for producing affordable, easy to take care of hybrid bikes for cyclists of all levels. The Vilano 700C Hybrid Commuter bike is no exception. Built with Shimano components and a hybrid aluminum frame, this little unit can take a hit while moving at full speed. The whole unit only weighs 30lbs, and someone with a little bit of muscle could easily sling this across a shoulder up a flight of stairs. You have Shimano parts up and down the model, which means you are getting a congruent, well-manufactured machine. GMC Denali Flat Bar Road Bike GMC is our underdog bike in these sets of reviews, though their Denali unit is as good as any others. This is a 21-speed bike with an aluminum frame that weighs in at 37lbs. A little heavier than the Vilano, this bike is also quite a bit sturdier. You have alloy brake levers and calibers and high-quality racing rims. Shimano makes the quality shifters, and the brakes get you stopping on a dime. We liked most because there was plenty of space to mount up additional functionality, and we were confident enough in the Denali that it could handle it.

Schwinn closes out our list of easy to ride, easy to assemble, flat bar road bikes. At an affordable price, under $300, you are grabbing an aluminum-framed machine that includes all Shimano parts. The 21 speed Shimano utilities are engaged by EZ Fire shifters and Shimano rear derailleurs. The sturdy frame allows you to weather most any urban riding you will encounter, but the lightweight keeps it from becoming a burden. There is plenty of room for additional mounts, and the low seated bars help when you want to lean down and focus on the fitness aspect of your riding and commuting regime.

Why Should You Consider a Flat Bar Road Bike?

When looking at a road bike, any style, you are looking for a bicycle that you need to use to get things done. Road bikes have become the standard for those morning commuters in the city. They need to be comfortable enough to handle longer distances, sturdy enough to maneuver in urban terrain, and light enough that they won’t break your back when you carry it inside and up to your office.