Are you in the market for a single-speed bike but don’t have thousands to spend? Every day the popularity of Single Speed Bikes is growing.

Whether you want to attribute hipsters or health nuts to the rise in chain-and-pedal cyclists on the street, you have to admit that they are there, and they are loud about what they love. The world of cycling is fascinating due to its cosmetic and health-oriented applications.

Some cycle to get cardio exercise while others bike because it relaxes them. Looking deeper into the world of cycling will reveal many different bikes and the kinds of people who ride them.

On this page, we will cover the difference between bike gearing and cover the details of each. Since the article’s topic is about the best single speed bikes, ‘fixies’ or fixed gear bicycles for the price, I cover that in a little more detail. Then you will confidently know if a fixie is a right bicycle to add to your garage!

How can you pick which one to grab with so many different single speed options on the market? To help facilitate the answer to that question, we decided to do a little research. Listed below are some of the best single speed bikes in the marketplace.

…click image to see more on Amazon The Takara Yuugen is a cheap but great fixed gear road bike. The 700c Takara Yuugen Single Speed Fixie Road Bike is ready for rough and tumble urban life. Features a strong tag welded steel frame and fork, 32 hole double wall rims with 28mm wide tires, and front and rear alloy side pull brakes. Available in Medium and Large. You won’t find a better bike to spend your money on for under $200.See more on Amazon…

…click image to see more on Amazon Customer reviews applaud the bike for how well it operates. High Tensile Steel Frame and Fork; Drop Bar; Flip Flop Rear Hub for Fixed or Freewheel Pedaling; 32 Hole Double Wall Alloy Rim, 700c x 28mm Tires; Single Pivot Alloy Brakes While many fixed gear bikes are on the market today, given the quality and durable construction of this fixed gear bike combined with its relatively low MSRP, it would be difficult to choose a better fixed gear bike.See more on Amazon…

Bicycles are a lot like cats to the random passerby: we know that they are bikes, we can’t tell the real differences between them.

If you decide to talk to any serious biking enthusiast, you will quickly learn about many different bike variations out there on the road. You have single speed bicycles, fixed gear bikes, and even multi-speed bikes. Each of these bike styles offers the rider a different experience and making sure that you grab the right bike is of the utmost importance.

There will be times where you definitely want to be riding a fixed gear bike or a fixie, and then there will be situations where a multi-speed bicycle is the way to go. Let’s dig into the minor and major differences between them all.

The single-speed bicycle is most commonly seen being used by people who need to get somewhere with a quickness but do not anticipate large changes in their terrain.

The defining difference between a single speed bike versus a multi-speed bike is that it only possesses one gear on its drivetrain.

Well, they are much easier to repair and maintain for starters over a long period of time!

Single-speed bicycles are made without derailleur gears or multi-speed hub gearing and lack any gear ratio control cabling or controls. Quite simply, there is less to work on because there is less there to break or need replacement. That is what makes it easier and less expensive to maintain than a multi-speed bike. They are also generally more lightweight than multi-speed bikes as there is less mechanical metal to weigh the bike down.

A single-speed bicycle is also much more efficient in its usage. The straight chain line and lack of drag from additional gearing helps to improve overall pedaling efficiency. You’ll be able to pedal smoother, long, and faster over the span of your entire ride. Individual components, due to the lack thereof, tend to be of higher quality and efficiency.

A single-speed bicycle is meant to take all of these extra features out of the way to allow the rider to enjoy a simple, enjoyable, and efficient ride. You wouldn’t think that shifting gears would be taxing, but you would be amazed at how much it distracts you from just enjoying the ride. You will find many city commuters riding short trips preferring to use this sort of bicycle for their daily rounds.

You can’t account for hills or rapidly changing terrain by changing gears. Longer riding at a slower or faster rate than the gearing’s optimal speed on long commutes can be strenuous. 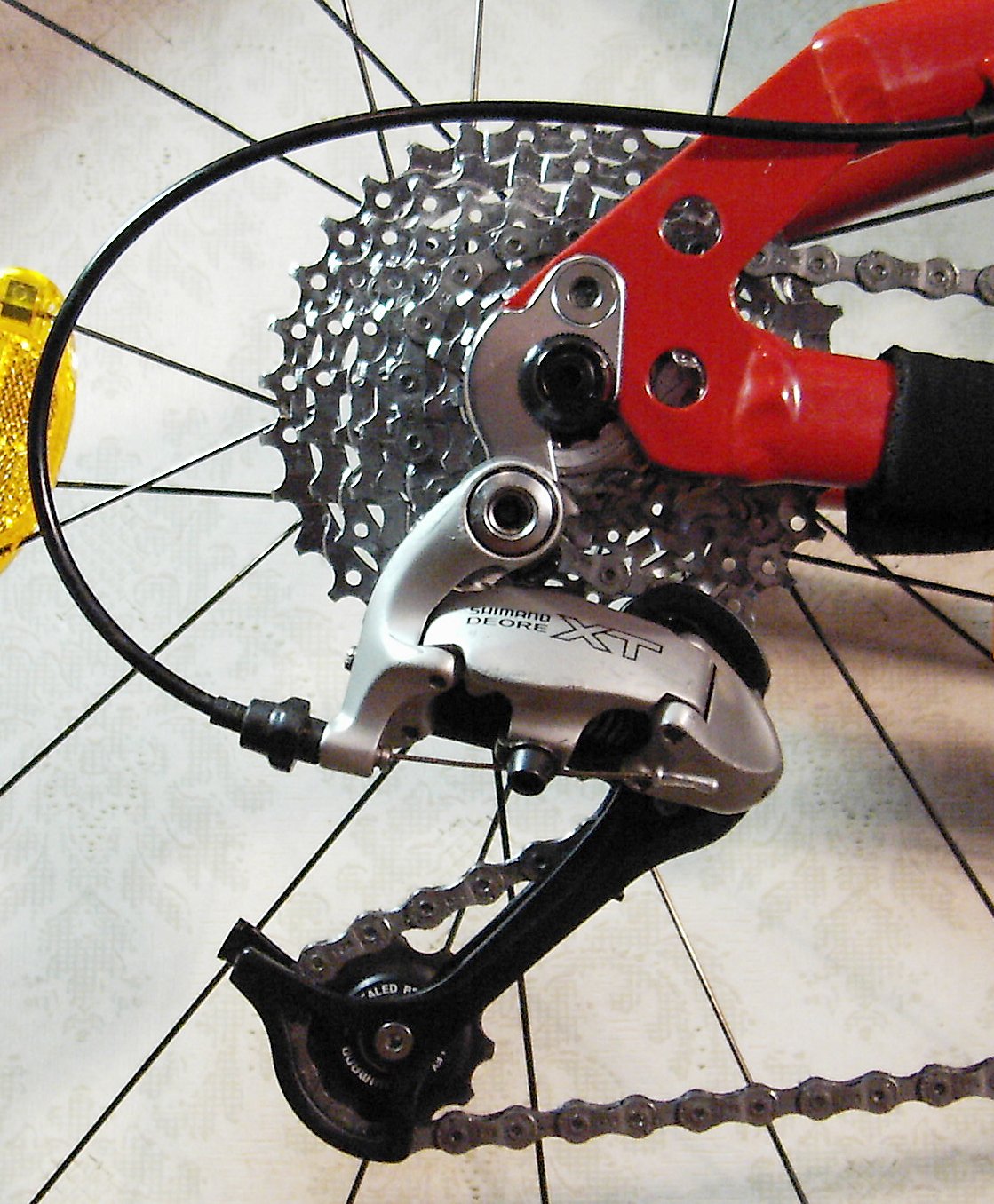 Multiple speed bicycles are different due to their abilities to switch gears to compensate for different terrains and environments.

This style of bike is completed with a spring-loaded arm and a multi-geared system. The derailleurs help move the chains to different heights and settings to allow for adjustments to be made while on the fly.

Multi-speed bicycles are super common for those that want to go trail riding, riding in hilly terrain, or those looking to commute great distances. The multiple gears allow for the rider to have an easier time peddling by being more mechanically efficient while getting the rider to their destination at a greater rate of speed. With proper maintenance involved, you will get close to the same life expectancy out of this sort of bike.

Though these multi-geared bicycles are more versatile, they are also more expensive and prone to problems. The additional gears, cabling, gear shifts, and other components mean more wear and tear on the bike and chain. All of the extra hardware required adds to the bike’s overall weight.

This means that you need to be capable of taking care of your bike while implementing proper preventative maintenance and adjustments.

The fixed-gear bicycle, or ‘fixie’, belongs to the class of single speed bikes listed above but is still different enough to get its own listing.

Fixed gear bicycles have a drive train, a system to push power through the bike, but lack the freewheel mechanism common in other bicycle types.

This freewheel mechanism prevents ‘fixie riders’ from coasting without the pedals turning. To move forward, the fixed-gear cyclist needs to pedal constantly. Think of a kid’s tricycle going down a hill and how the pedals need to turn.

Fixed gear bicycles typically only have one brake, the front brake, while some have no brakes at all.

You can find fixie bikes being used by urban cyclists and competitive racers. The low resistance and high work effort involved make them the perfect training bicycle for off-season racers.

The film “Premium Rush”, starring Joseph Gordon-Levitt, features a fixie bike as his primary vehicle. In the film, we see how the top-end speeds and lack of brakes hurt and help him while riding around the city.

Can’t make up your mind? You may want to consider a bike that comes with a flip-flop hub. It has a gear on each side of the hub. One is fixed while the other is single speed.

Decide what type of rider you are.

Now that you have a little bit of knowledge about the different bike styles available, you can start to decide what sort of bike will be perfect for you. Many factors come into play when it comes time to purchase a bicycle.

Are you in an urban environment? Do you have to deal with cracked sidewalks, bumpy roads, and undulating hills? Look next to what sort of riding you plan to be doing. Are you using the bicycle primarily for a short commute, or do you want to use it as a device for exercise and exploration? Each answer will help push you toward the type of bicycle you should purchase.

Why should you get a single-speed bicycle?

We’ve looked at the positives and negatives involved with most different bicycles by this point, and we highly recommend that our readers try out a single-speed bicycle if you have never considered it.

Why the suggestion? Well, single speed bicycles are a revelatory experience for amateur enthusiasts who need a vehicle to commute and ride around town with. Single-speed bikes are low cost, low maintenance, and easy to ride in calm environments. You will find no ride smoother for long expanses of relatively level terrain than some of the available quality single speeds.